Pi Network: is it light or scam? How to make money with Pi Coin 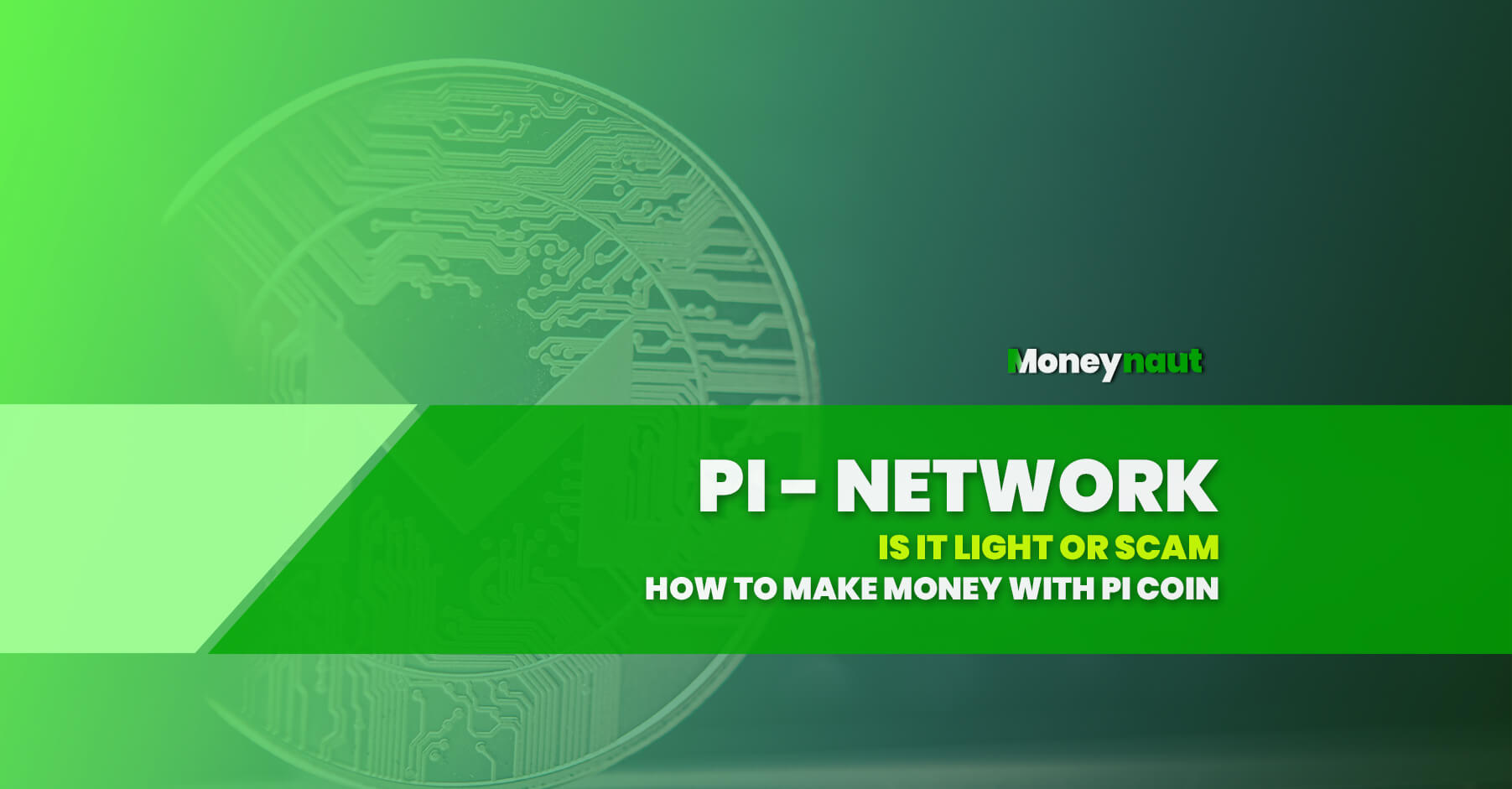 What exactly is the Pi Network? Is it a scam? Should you download it? Should you trust it?

We’re going to try and answer all of those things regarding PI Network.

Just a little disclaimer I’m not a shill for pie network. A shill is someone who pretends to be a customer. Still, in actuality, they’re just someone marketing the product to start these apps because they are multi-level marketing companies you need to be referred by someone else.

It’s entirely your choice, and you have to make the decision yourself as to whether or not you want an app like this on your phone, so that’s what we’re going to attempt to make a decision now.

The last couple of days, I’ve been researching as much as I can into the PI Network and other forms of mobile cryptocurrency mining, trying to get a complete understanding of what it is precise that everyone’s going crazy about.

What Is Pi Network?

So, first of all, what exactly is the pie network? In their own words, it is a secure, immutable non-counterfeitable digital currency in the same idea as Bitcoin. So you’ve got pounds, you’ve got dollars, and now you have digital currencies like bitcoin and Ethereum and possibly PI. Still, one thing to note is it’s not currently a digital currency that you can buy or sell for real fear money; they’re in phase one, which is just basically building out the network.

It works on mobile phones, and it doesn’t drain your battery; how is that even possible basically, what that means is instead of mining the cryptocurrencies much like you mine bitcoin, a bitcoin miner is simply just completing high-level equations when they complete that they are rewarded with a certain amount of bitcoin unlike that PI Network is not mining at all on your phone you’re simply just logging into their app pressing a button, and that’s it you’re verifying that you’re not a robot and that you’re a committed member of the pie network society is essentially it.

Let’s quickly talk about the different phases within the PI Network.

Phase one is the design and the distribution; right now, Pi The Network is emulating what it would be like on their leading Network, you’re just receiving an award for logging into the app and for referring new users once they move into phase three, the leading Network, they promise to copy the exact information and your exact amount of coins onto the leading Network. Then you’ll be able to exchange those coins for fiat currency which is real money.

Phase two will be the test net; they’re testing different software and where people can become nodes to hold information and run transactions within the test network. It will be the last step before they move on to phase three, which is the leading Network; once the community feels the software is ready for production and it has been thoroughly tested on the test network, the official Main Network of the PI will be launched once they launched the phase one emulator will then be shut down but don’t worry all of your coins will be copied from the emulator into the main net so no one will lose any of their pie coins at this stage there’ll be no central authority. People can exchange the pi currency for goods and services. It will be 100 decentralized, so no one bank will control all of the transactions within the Pi Network, which is one of the main attractions to cryptocurrencies.

Phase three, as I’ve said this is when things can get exciting; this is when we can start making some real money. When Pi coin is hopefully added to the online exchanges, we’ll be able to trade it for that real sweet cash. Hence, Pi coin is like any other cryptocurrency its aim is to be decentralized have no one authoritative figure that decides and tracks what’s happening on the Network.

What is the difference between Pi Network and bitcoin?

So pi is a cryptocurrency, but what exactly is the difference between Pi and Bitcoin.

Well, in their own words, they have said while cryptocurrencies like bitcoin secure their ledgers by forcing miners to burn energy proof of work pi secures its ledger with its members vouching for each other’s trustworthiness. Pi’s contributors vouched to each other by building security circles comprising of three to five members they deem as trustworthy instead of answering long equations like in the bitcoin network what you’re doing is you’re vouching for the trustworthiness of other members; that’s where the referral codes come into the hand you bring in people that you supposedly trust into the network, and that’s the PI Network’s version of mining building a trustworthy society of people by doing this. We can create a place where people trust each other and prevent fraudulent transactions or having other scam artists try and scam people out of money using the PI Network cryptocurrency within Pi; there are four different types of users.

Type of User in Pi Network:

The Pioneer in Pi Network:

The pioneer is a user of the Pi app who confirms that they are not a robot logging into the app daily, just simply and clicking the mind button. This user validates their presence every time they sign in to the app; they can also open the app to request transactions make a payment to pi or another pioneer.

The Contributor in Pi Network:

Next is the contributor, a user of the Pi mobile app, is contributed by providing a list of pioneers they know and trust. Something to know is that the pi contributor roles become unlocked for the users after you’ve finished three mining sessions as a pioneer. After three days of mining, you will see a new icon of the security circle on the app’s home screen, which you click to start becoming a contributor. You will need to add three to five people you trust within your security circle. That’s how they’re building the pi network and making it trustworthy.

The Ambassador in Pi Network:

The Node in Pi Network:

How to make money with Pi Network?

How exactly do we use the pie network to make us any real money?

The short answer is currently, you don’t make any money from the PI Network. So in actuality, it’s very one-sided. So you’re downloading the Pi app onto your phone. You’re giving the app access to various parts of your phone’s data; we’re talking about contacts apps that you use and different information about yourself in exchange for a currency that isn’t worth any money at this stage.

How long will it take to make money with Pi Network?

We have no idea of whether or not this pie network coin will be worth anything in phase three Pi Network. After that, they Will move on to their leading Network, and at that stage, Pi Coin will be added to popular exchange platforms where hopefully we can make some money.

Do Pi Network is a scam?

Well, it’s kind of up to you guys to decide that do you think that being rewarded with the possibility of a currency being worth money in the future is a possible exchange for your data, or is that a scam in your eyes that’s the question you have to answer yourself. As for me, I’ve got both pi and B on my phone currently. I see them as very similar to something like Facebook. It has access to our phone’s data; they sell that data to third-party advertisers, and they make money using our data. If you have a background in social media marketing, as I do, it’s pronounced that our data is being sold on so many different levels. Currently, you can opt-out of ads, but they say that the ads are paying for them to build out their infrastructure. So if the PI Network is a legitimate company that does want to bring a cryptocurrency to market, then these ads could be helping pave the way for that, and if that’s something that you want to be involved in, then maybe you should consider it.

I have downloaded the app. Again, I don’t mind if Pi Network is using my data because I have a phone. I feel like most of the apps that we have on our phones are doing the same thing, but again that’s something you’re going to have to answer yourself. I can’t answer that for you. As of right now, the pie network’s coin has no value. It’s simply what your perceived value of it is their third phase. After that, they plan on putting the PI Network coin onto exchanges so you can exchange it for real money.

It’s multi-level marketing; to grow your network and make more Pi coins, you need to invite more people into the app, so yes, it is multi-level marketing. Is it a scam? If you decide that Pi coin is worth something to you and you believe in the future of the Pi network, then sure, it’s a give and take. There are similarities between the PI Network and pyramid. We haven’t seen any proof that one of the PI networks is using our data maliciously. We don’t know whether or not the pi network will be worth anything currently; if you believe it will be worth something, they are giving you a monetary gain in that sense. So really, it all depends on whether or not you think that the Pi currency will be worth something in the future.

So hopefully, that clears up pi Network a little bit for you. I know it’s all very confusing; there are lots to it. I just wanted to make this article an introduction to the PI Network.

In conclusion, You have to decide this for yourself. Do you think it’s a scam that the pie network is potentially just wasting our time? You’re wasting that time where you log into the app you’re referring people, but the pie coin might never actually be worth anything two there is a potential that these apps and the Pi network is collecting data and then selling it onto third parties for things like adverts, this is very similar to the business model of Facebook, but you have to decide for yourself if it’s worth it and if you consider that a scam, those are the things that you need to think about before downloading the app. I’ve personally downloaded the app, and I’m using it. If you want to download the app, you’re going to have to use this referral code “SHOTNCT” remember, that’s the only way to join the Pi network. When you’re installing the app, I’m interested to hear your thoughts and opinions on the PI Network; please leave a comment below.

Get this exclusive content, strategies and tools straight to your inbox.